There’s a “farmer’s market” in town that you may not know about. That’s because it’s just for the students of Cesar Chavez Middle School. Patrick Littleton organizes this mini market every Tuesday of the school year during the lunch break, using produce from Second Harvest Food Bank.

Patrick sets up a booth in the courtyard, sometimes with a camp stove to stir fry veggies, sometimes with just two big buckets of fruit. He turns up the music on the boom box as students begin to file out of their classrooms toward the cafeteria. They flock toward him to get a taste of whatever he’s serving that day- sautéed kale with Tapatio, steamed broccoli, orange slices-and then proceed to socialize with friends in the midday sunshine. 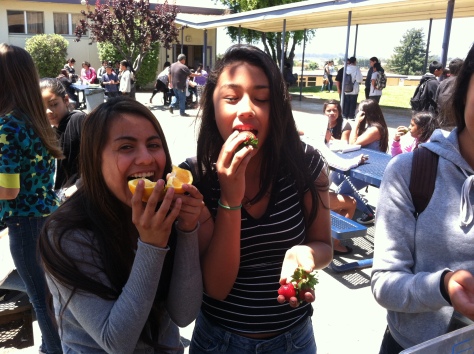 Patrick’s not just out to change the way the students see these vegetables and fruit, he’s determined to change the culture around healthy eating. He started the school garden at Cesar Chavez and Starlight Elementary School so that students could have a field to fork relationship with food. But he also hopes to impact way the students are eating in their homes by teaching them how to cook the produce.

Which is where Cesar Chavez’s partnership with Second Harvest Food Bank makes a major difference. Cesar Chavez receives 1,000 lbs of produce from Second Harvest each week of the school year. This produce is what Patrick uses to put on the farmer’s market. During recess, after the students get their lunch, they can stop by for a healthy snack of fruits or vegetables. 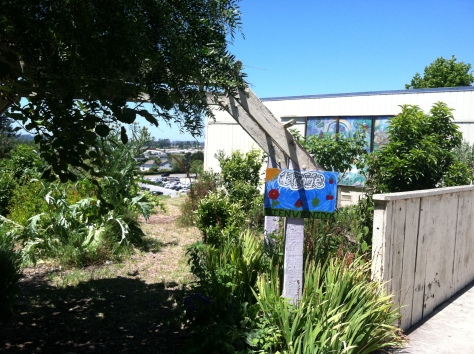 Students also have the opportunity to participate in an afterschool program with Patrick in the school garden. The students learn about the nutrition of fruits and vegetables and how to grow and cook them. The class focuses on healthier ways of preparing the food; for example, steaming instead of frying the vegetables.

After the class, students take home boxes of produce from Second Harvest.

“The relationship with the food bank provides the resources to help the students make those healthy decisions,” Patrick says. “From making [the produce] available during recess, to being able to cook, prepare, and grow the food after school, and then also to be able to have access to it for free has significantly increased the fruit and vegetable consumption within our school’s community.”

Without the access to free fresh fruits and vegetables from Second Harvest, students at Cesar Chavez would remain defenseless against the rising statistics of childhood obesity, and without Patrick’s vision, these resources might go to waste. Looking out over the Cesar Chavez garden, the space where the students come to cultivate a healthy food community after school, it’s clear that the seed of change is already growing.